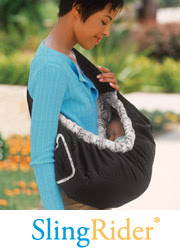 My husband went out and purchased the Infantino SlingRider at Target for $29.99 within the first week after L & D. He was looking for something to carry around our little bundle in since she wanted to be perpetually cuddled and snuggled and warm in our arms. This turned out to be just the thing!

Appearance: This sling is extremely cute and I was often complimented on it when I went out on the town. My friends and co-workers called it my "purse" and people were often surprised that I had a baby in my trendy bag. Another bonus - the carrier is black and thus goes with almost anything!

Material: The material is soft and the carrier is machine-washable (a necessity for new moms - who has time for drycleaning or handwashing?).

Utility: According to the website, this carrier is for newborns and infants up to 20 pounds, but I can't imagine that an infant over a few months of age would want to lie down in it. It's best for itty-bitty babies - in the stage when they perpetually sleep and eat, only waking for short moments of time. After that stage, babies typically become extremely interested in the world and prefer to be sitting upright or facing out.

Despite its short-lived usefulness, I loved this sling and plan to use it again for my next little one.

This carrier provides a win-win scenario: The baby feels safe and snuggly inside - and the new mama has her hands-free and looks cute while still having the baby as close as can be.

* The Infantino SlingRider is available at Target, Babies-R-Us, and Wal-Mart.