Get Baby to Sleep 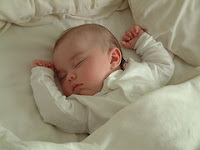 That's what everybody wants to know. I try to avoid that question altogether - asking it or answering it. It seems like a silly and useless question for several reasons.

First, the question-asker often asks the question because he/she wants to jump right in with some unsolicited advice if the answer proves unsatisfactory.

Second, if a baby is a "good sleeper", it means nothing in terms of baby's future intelligence, beauty, spunk, or kindness.

Third, many people judge a parents aptitude by baby's sleep patterns - something that is almost always out of the parents' control.

All this to say, start asking a different question because it doesn't really help to ask that one. Maybe ask, "Can I bring you dinner on Tuesday?" or "Do you want me to babysit for an hour this week?" Or say, "here's a really great sling for helping with a fussy baby. Do you want to borrow it?"

But not, "Is baby sleeping through the night?"